There are certain things in life that I have always wanted to have that I knew would never happen naturally.  When I was little, all I wanted was straight blonde hair.  I had light-ish brown curly hair.  I remember being on a vacation with some family friends and their daughter, who had gorgeous straight blonde hair.  I wanted to have her hair.  Then one afternoon, I spent the entire day inside crying because this hard reality hit me.  My curly brown hair would never EVER become straight blonde hair.  Once I was old enough to color it and once the flat iron was invented, my dream became a reality.  Sure, I have to spend way too my money to get my roots done.  Sure, I have spent years trying to find the right products to keep my chemically and heat-treated hair at an acceptable level of health.  Sure I have lost hours of precious sleep to wake up to straighten all my curls out, but hey, I have what I have always wanted.  The same goes for my lashes.  It seems that the only blonde straight hair I have naturally are my eyelashes.  As you can tell from the photo, they’re basically non-existent.  I hate using strip lashes and I don’t even enjoy putting on mascara anymore, so I decided it was time for some drastic measures!

I was going to wait until the week of my wedding to get eyelash extensions, but I figured I would treat myself to a little glam for my 30th birthday.  There are a couple of Amazing Lash Studio locations in Austin and I couldn’t resist their $79.99 introductory offer!  Some of you may be interested in learning how the process works so I thought I would write about my experience.

I went into the studio and they took me into a little room after filling out some paperwork. It is like the kind of room that they take you into when you get your eyebrows waxed at a nail salon.  Although this one had a fuzzy, heated bed.  The lady who did my lashes asked me which style I wanted.  I figured the Natural style would be a good starting off point and we could add on from there in the future.  I also inquired about their membership, which costs $49.99 per month and covers the cost of a refill.  She mentioned that people often need to come more than once a month, but I’m going to keep my fingers crossed that I can just keep it to the one appointment.

She placed gel eyepads on my lower lid to try to cover up my lower lashes.  My eye did not like this for a second.  Both immediately started watering.  She also placed some tape on my upper lid which didn’t bother me.  Then the bright light came.  Now, I’m the kind of person that asks to wear sunglasses to get my teeth cleaned and asks to have a towel put over my eyes during massages.  I also sleep with a sleep mask.  My eyes are oddly sensitive to light sometimes.  Once I composed myself, we were ready to rock.  She started with a primer and then started glueing a false lash to each of my teeny, tiny natural lashes.

It takes a long time, y’all.  I would almost recommend bringing earbuds to listen to an audiobook.  It took about two hours.  I don’t sleep on my back so eventually just laying there was starting to get uncomfortable.  My right eye started stinging a bit and I was told it was just the fumes from the chemicals.  A couple of my bottom lashes escaped the eyelid barrier and got glued to my upper lashes.  It was not comfortable prying them apart, but at least they didn’t get ripped out.

I was shocked to look in the mirror after it was done.  They looked awesome!  I couldn’t believe that I get to just run around with these awesome, glamorous lashes and how little makeup I will need to wear during the week! 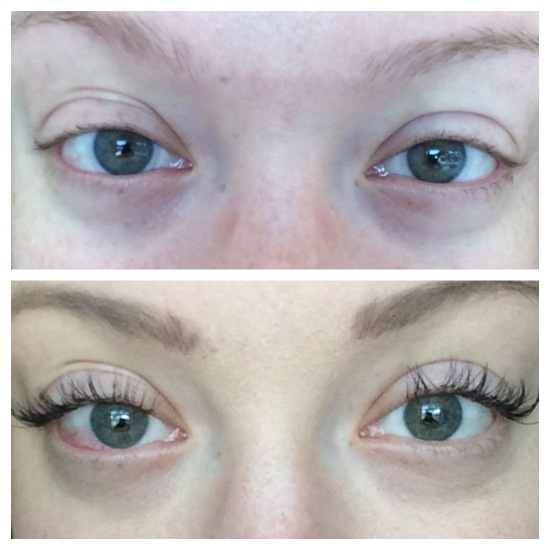 Before and After. The bottom photo was taken when I woke up the following morning. #iwokeuplikethis

I ended up purchasing their lash brush, which the fiancé and I had a very Zoolander time figuring out how to use, as well as their lash and eyebrow growing serum.  I imagine it works like Latisse.  I also signed up for the membership and will go in to get my first refill in three weeks.  Fortunately, refills typically take an hour or less.

As you can tell in the above photo, the irritation in my right eye is visible.  When I tried to put my contacts in the next morning, it felt like I had last night’s green curry on my fingertip.  I touched the red part of my eye and it STINGS, y’all.  I consulted my on-call physician, Google, and it appears that this is called Chemical Pink Eye.  Evidently it is fairly normal.  I think between my issue with they eyepad, all the watering and dabbing that came with it, and my restlessness towards the end, my eye got a little too exposed to the fumes.  Boy, am I glad I decided not to do this the week of my wedding. 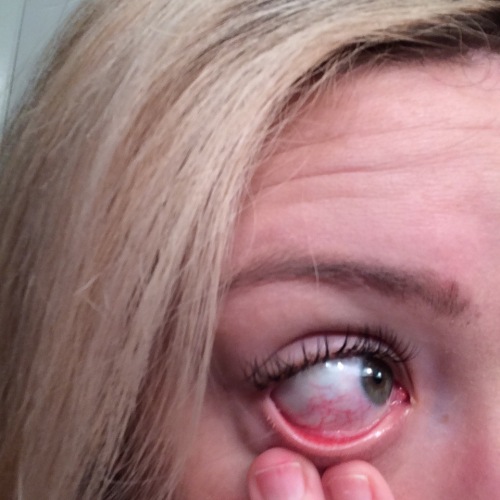 I know this is gross, sorry

Apparently using preservative-free artificial tears will clear it up in a couple of days, so my eye will just rest comfortably under my glasses in the meantime.  So far, no additional symptoms of actual pink eye have appeared.  I don’t want to have to call into work ugly.  The good news is I can tell that my eye is already feeling much better than yesterday.  If this happens again, though, eyelash extensions may not be for me.  However, I do love them and I am willing to keep giving it a shot!