Every time I hear the word “trifle” I automatically think about the Friends episode when Rachel tries to make an English Trifle and fails spectacularly because the pages of two recipes were stuck together.

Then custard, which, I made from scratch.

Then raspberries, more ladyfingers.  Then beef sautéed with peas and onions.

More custard, then bananas, then I just put whipped cream on top!”

Sounds abominable, yes?  Not according to Joey!

Today was our annual office Thanksgiving feast.  Last year I brought a Kugel because it was Thanksgivukkah.  I guess Kugel is weird to anyone who hasn’t grown up with it and I think my coworkers were afraid of the concept of sweet noodles.  This year, I initially signed up to bring pies.  Too many people wanted to bring pies so I quickly scanned Pinterest for other ideas.  I found this Pumpkin Gingerbread Trifle recipe and decided to channel my inner Paula Deen. 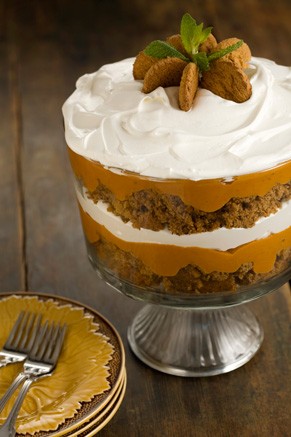 My first questions was, “how much butter is in this”?  Surprisingly, there was none (or so I thought) so I went for it.  My coworker told me that she wanted nothing to do with that Cool Whip garbage and suggested I make homemade whipped cream.  Brown sugar whipped cream to be specific.  I had never made whipped cream before nor had I heard of it being made with brown sugar.  I went back to Pinterest and found this Brown Sugar Whipped Cream recipe.

This recipe is to be presented in a Trifle Dish.  It would seem that a Trifle Dish would be an easy item to find.  The most difficult part of this recipe was finding a dang Trifle Dish.  I dragged my boyfriend to Walmart, Home Goods, and TJ Maxx to no avail.  I almost caved and bought a $30 Ralph Lauren bowl to just get it over with so we could go to dinner.  The following day, I checked Marshall’s on my lunch break and STILL nothing!  I almost just caved and bought a vase.  I finally found one on Target’s website.  Of course, none of the nearby locations had them in stock, so I used the Pick Up In Store option to retrieve one from a land far, far away.  The one they reserved for me had a defect, so they sent me on a wild good chase to hunt down another one.  Wasn’t the whole point of reserving it online to not have to search for it in the store?  Anyway, my search is now over and I am the proud owner of a Trifle Dish.

For the Whipped Cream

The trifle was a hit along with the bazillion other delicious desserts at our Thanksgiving feast.  This dessert is so rich that it could surely feed an army, but it was scrumptious.  This may be my new go-to fall dessert!  Partially because it is delightful and partially because you should not eat this more than once a year.  Just a fair warning.