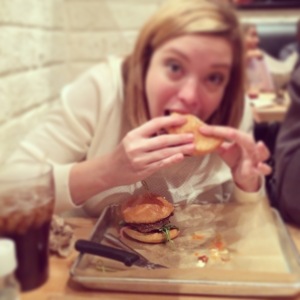 A photo of my life changing

After over two years of being back in Austin, I finally braved the wait and tried a Hopdoddy burger.  I decided that I have avoided avoiding the line for too long and it was time to just bite the bullet.  I have attempted to go to Hopdoddy numerous times, but quickly diverted to Pho Thaison or Verts.  My boyfriend has a serious addiction to Pho, so it is never difficult to convince him to go to Pho to avoid waiting at another restaurant.  I have never had any desire to brave the South Congress Hopdoddy location.  I see that line every time I go to Kendra Scott to throw away my paycheck.  FORGET IT.

It is currently unseasonably cold for November.  Texas has no reason to complain since we’re at the bottom of this polar vortex. However, we cannot currently wear shorts like we normally would around Thanksgiving so our lives are in shambles.  My best friend and my boyfriend and I were hungry for dinner and were discussing our options.  We decided that since all of Austin was in hibernation for the cold, surely there would not be a single soul at Hopdoddy.

For the first time in my life, there was no line outside of Hopdoddy.  We got to the door where we were promptly stopped by the Hopdoddy Temple Guard.  The line was too long inside of the restaurant and we would have to wait outside.  You see, my typical after-work outfit is whatever I was wearing on my top half coupled with yoga pants.  It is a completely functional and unfashionable way to be comfortable until bedtime.  Yoga pants do not keep your butt warm, just FYI.  We stood there outside in the cold attracting popularity for the restaurant.  I still believe that our purpose in standing outside was not because the restaurant was at capacity. Its purpose was to tell our fellow parking lot patrons that Hopdoddy is still the desirable and delicious establishment that warrants waiting in the cold.  The Temple Guard offered us menus so we could study what delicious treasures awaited us inside.

After about three very cold minutes, we were greeted into the warmth and became enveloped in hot beef smell.  Now, I had never set foot inside of a Hopdoddy and had no earthly idea how the process worked.  We were placed in the back of the line.  When you are in this situation and are very hungry, you develop a strong resentment for the people who are already seated with their cheese fries and gourmet meat patty concoctions.  You also start to observe how many people are seated but do not have their food.  This becomes one more obstacle on your journey to burgerdom.

The line runs along the length of the bar.  A bartender asked if we wanted anything to drink and my best friend ordered a Nutella Milkshake.  I watched in awe as the bartender literally scooped Nutella from a jar into a pile of ice cream and a dash of milk.  The milkshake was presented with a giant mountain of whipped cream and a straw so wide that even people who drink the tapioca-est of bubble teas could not handle.  All the better to slam this milkshake with.  It was even more delicious than it looked.  Since this was to be our only sustenance while we were surely going to wait an eternity to order, she was probably not happy that I kept sneaking sips.

Choosing a burger was difficult, but luckily we had so much time to choose.  What does one choose and choose wisely?  Do you play it safe with a regular cheeseburger?  Or do you go to the other end of the spectrum for the Ahi Tuna burger?  It came down to three choices: the bison, the lamb, or the Texas-Akaushi-Beef-Brie-TruffleAoli-Arugula-CarmelizedOnion-SteakSauce burger which could only have been created by God himself or a wizard.  What is Akaushi?  Probably some sort of beef blessed by a the spirit of Jim Morrison that only hipsters eat.  I opted against it this time.

It came down to the bison burger and the lamb burger.  I couldn’t decide so I suggested to my boyfriend that we each get one and split them down the middle.  He thought this was a good enough idea.  But WHAT KIND OF FRIES DO WE GET??  Just fries?  Truffle fries?  Just fries with green chili queso?  The third became the obvious choice because hello all Texans need queso on everything.

Then tension began growing in the line.  As we drew closer to the front, the glares went from the patrons to the the wait staff manning the finish line.  The other people in line began to turn against the wait staff by ignoring the sign to not block their walkway.  It STILL took me a few to figure out how all this would work.  When I was told that this was the line to get a TABLE, I became uncomfortably hungry and almost opted for a nice bowl of Pho or a delicious Kebap.  I decided to tread on.

Finally, we had our table assignment and could order our food.  The anticipation to receive our juicy burgers made it seem as if we had never waited in line at all.  Our next stop was the soda machine.  The soda machine only served what can only be described as the nectar of the Gods, Maine Root.  Orange soda?  Root beer?  Doesn’t matter.  All spectacular (but of course I got root beer).

We sat down and the fries were served to us immediately.  They were tiny and delicious.  This was not any normal green chili queso.  This special queso would not be appropriate for a tortilla chip because it is absolutely the soul mate of  Hopdoddy’s signature fries.

Then the burgers came.  I sliced through the buttery, brioch-ey bun and did the old swap-a-roo with my boyfriend.  The first one I tried was the bison burger.  I imagine this is what bison must have tasted like straight off of the Oregon Trail, minus the impending typhoid or diphtheria.  Though, I am not sure they had the accompanying crispy, thick bacon or Frank’s Red Hot sauce.  Or brioche, for that matter.  So much of it had disappeared in such a short amount of time that I decided to stop about 2/3 of the way through to try the lamb burger.

I took a bite of this scrumptious burger and was floored.  TZATZIKI? FETA? All my favorites were there!  Ron Burgandy loves lamp as much as I love lamb.  It is possible that I blacked out while eating this burger, but I do remember it being incredible.  I tried to go back to the remaining portion of my bison burger, but was defeated.  I could not eat another bite.  My boyfriend gladly polished it off for me.  The burgers seem small compared to the metal lunchroom tray they are served on, but do not be deceived.  They are large I am ashamed of how quickly I put away the portion of the burgers I did eat.

We slowly waddled out of the restaurant and ventured back into the cold.  Our journey was successful.  If there was not such a tremendous wait to eat at this restaurant, then I may consider going more often.  Perhaps the anticipation is part of their guest experience.  I give two thumbs up to Hopdoddy.  Get the bison burger.  Or the lamb burger.  Or the Akaushi thing.  Ugh, too many choices.