I was having so much fun with all of the Green Chef recipes that I thought I would give a similar service a try.  I have heard equally good things about Hello Fresh so I hopped on Groupon to see if there were any deals.  Lo and behold… there was a deal!  I thought it would be worth the $39 to give it a shot.

It works exactly like Green Chef.  It is a subscription service.  The first one will be included in the Groupon deal.  You need to be sure to adjust your settings to how often you would like to receive them, or you can expect to be charged full price for the lovely shipment that will arrive on your doorstep the following week.  Like Green Chef, it comes in a box that is packaged to keep all of the ingredients fresh.

One thing that was different about Hello Fresh is that you receive the three meals, but you can choose from five options.  If you don’t like one of the options that they are sending you, you can choose from two others.  For my shipment, I kept the Bloody Mary Chicken and Lebanese Beef Skewers.  I opted out of the Tempura Fish Tacos and chose the Smokey Black Bean Cakes instead.

All of the meals came in individual baggies which I really liked (except for the meat, of course).  Hello Fresh also uses fewer large ice packs as opposed to the many smaller ice packs Green Chef does.  It came with a cute little recipe book where I expected to find all of the recipes.  Surprisingly, I was wrong!  The recipe for the Lebanese Beef Skewers was not in the book.  I would have thought that the “optional” recipe I chose would be excluded, but I was surprised that one of their main recipes was not included.  Fortunately I could find the recipe on their website, but I didn’t like having to keep my laptop out on the counter while I was cooking.  I would rather have had them print it off separately and include it in the shipment.

I was the most excited about the Lebanese Beef Skewers and decided to make these first.  First and foremost, I took a moment to admire the cute little baggy of ingredients!

I do want to mention the added challenge of trying to cook a meal and photograph the process with a sleeping Golden Retriever between your feet.  I have a small kitchen and boy does she like to hover.

All of the ingredients are individually measured and adorably packaged.  I found it interesting that the packaging is not consistent.  The All Spice came in a little plastic pouch with a perforation, the Cinnamon came in a wax paper pouch that was sealed with a sticker, and the Cayenne Pepper came in a cellophane baggy.  Maybe it’s so you don’t get them confused?

The first step was to soak the skewers in water so they don’t catch on fire under your broiler.  It took me a while to find a container long enough for the skewers!  Pyrex baking dish it is!

I boiled some water and salt and added the quinoa.  Utilizing Master Chef skills here. 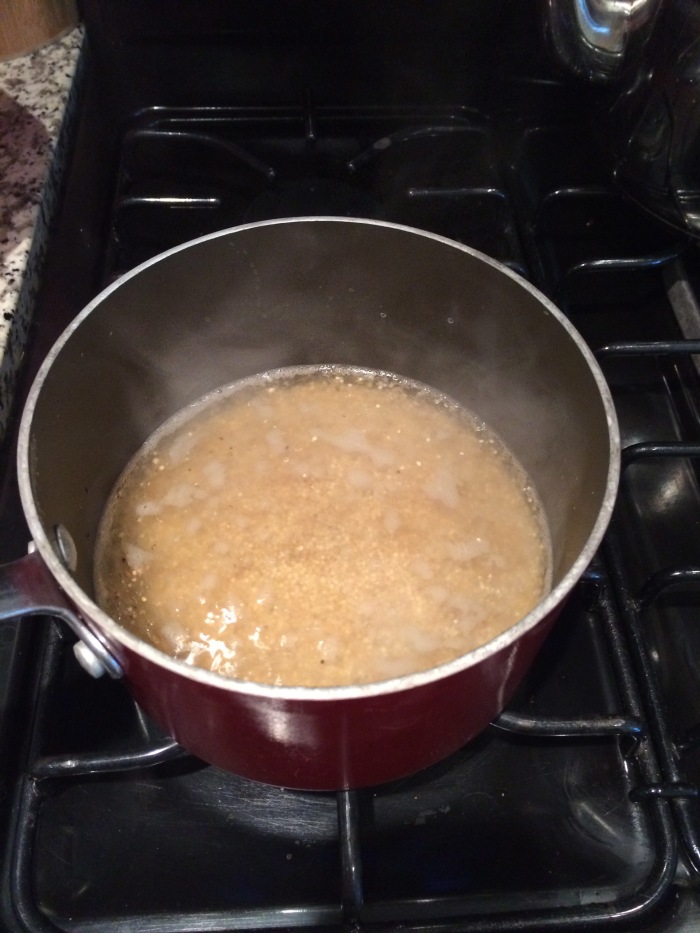 The recipe said to chop half the onion.  This was great.  I hate chopping onions.

Next on the chopping block was the parsley.  Ha.  Literally. 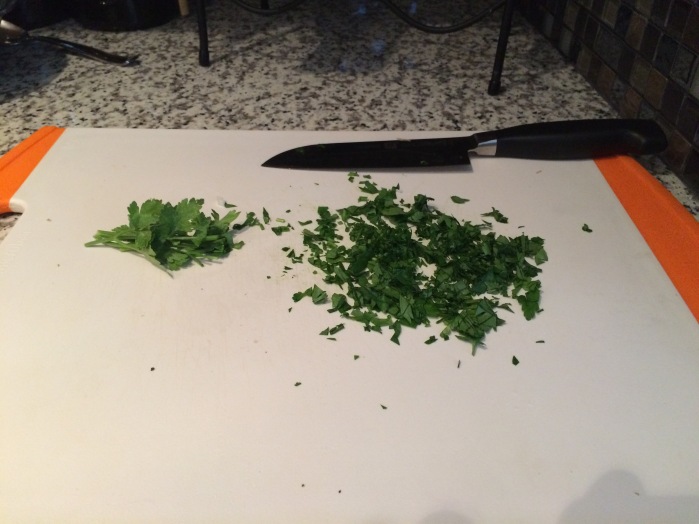 Then the tomatoes.  Notice my cute little ingredient bowls in the background?  They make me look like I know what I am doing.

The recipe didn’t mention anything about peeling the cucumber but I did anyway.  I don’t like the nasty, waxy outside of a cucumber.  Gimme the good stuff!

Finally, the scallions.  These are fun to chop.  I feel like a pro when I chop scallions.  It also helps that they are delicious. 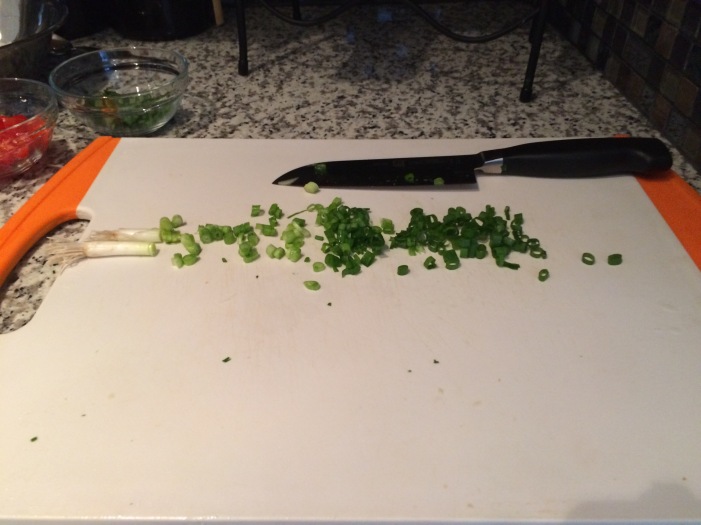 Next, I added the onion, spices, and ground beef into a mixing bowl.  I added a little garlic salt on my own volition because I like to live on the edge. 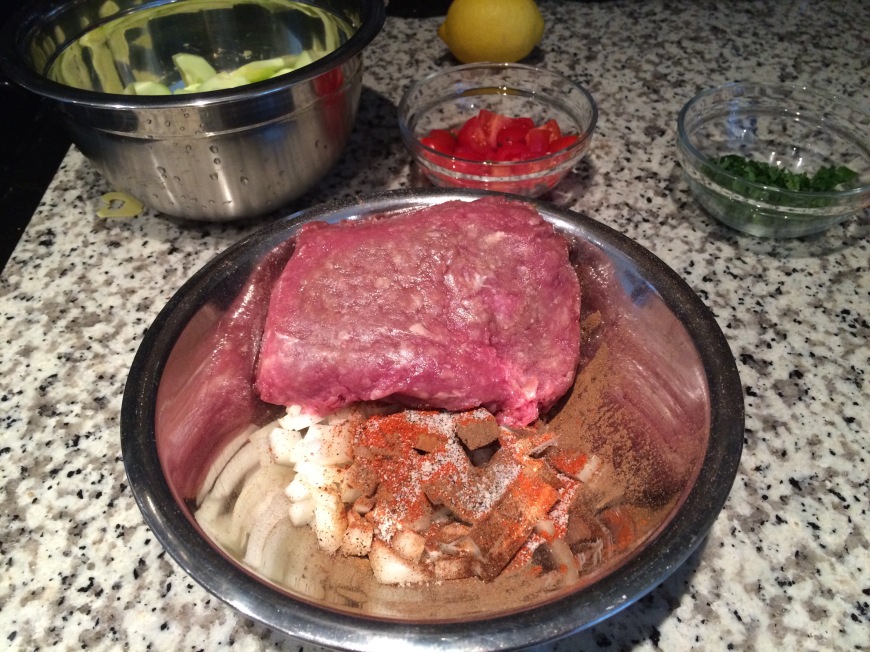 I tried my best to make the meatballs evenly sized then skewered those bad boys.  I put them under the broiler.  Little did I know that this cheapo baking pan thingamadoodle would warp under the heat and cause the whole dish to fling forward to the front of the oven.  The pan almost fell out when I opened the door to flip them.  My boyfriend and I had to get on each end of the oven door to catch it.  Note to self: Walmart baking pans are NOT meant for broilers.

Meanwhile, it was time to make the salad.  I zested the lemon and added it to the tomato, parsley, cucumber, olive oil, and pepper mixture.  It called for salt, so I upped the ante with some sea salt.  Forget that old table salt.  It’s not cool enough for quinoa salad.  I also ended up feeling bad for the other half of the onion and decided it might add some nice texture to the salad.  I did not regret this decision.  I stirred in the quinoa once it was done cooking.

I ended up not leaving the meatballs on the skewers since meatballs are delicious and no one has time to de-skewer once meatball time arrives. 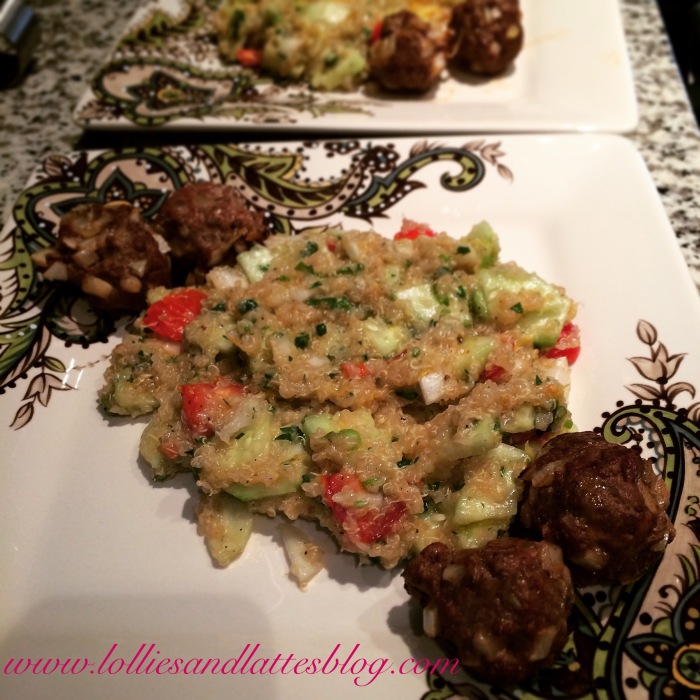 This meal was SO SO good.  My boyfriend didn’t stop talking about it for a couple of days.  Another advantage to Hello Fresh is that no part of the recipe comes pre-prepared.  All of the ingredients are provided individually so they will be easy to recreate in the future.  Green Chef does come with some pre-prepared mixtures and sauces, which could potentially be difficult to duplicate in the future if you really love the recipe.

We haven’t tried the other two meals yet so the verdict is out on whether or not we will make the switch from Green Chef to Hello Fresh permanently.  Hello Fresh is about $15 cheaper per shipment, but I think the main difference is that Green Chef is organic and Hello Fresh is not.

I’ll be sure to post the other recipes once we get the chance to make them!