Happy Monday!  Yes? Is anyone happy about Monday?  Well, it’s over now!  So there’s that, right?

I hope everyone had a lovely weekend!  This was the first weekend in MONTHS that my boyfriend and I finally had the time to take care of some things around the house.  Like unpacking boxes.  Yes.  We still have some of those.

We also decided that we wanted to get the dogs out for a bit so we took them to Zilker Park.  This was only Zita’s second off-leash experience with us and we were nervous.  There is still definitely some selective hearing going on, but overall she was just a peach.  The park was EMPTY, y’all.  I couldn’t understand why my fellow Austinites weren’t taking advantage of all this sprawling gorgeous, green grass that has grown from all this rain.  I realized why about five minutes in.  Austin was no longer a city but had just basically transformed into one big sauna.  We didn’t spend more than 30 minutes in that humidity before we packed up the pups and headed home for some AC.

We definitely made progress on our garage!  It’s starting to look more like a functional storage space rather than a hoarding nightmare.  Two trips to Goodwill down and a few more to go!  I also have a Salvation Army pickup scheduled for some of the larger items.  It definitely feels good to purge all this stuff, I’m telling you.  Anyway… onto the purpose of today’s post!

I hate to be the bearer of bad news, but this is not my typical I LOVED THIS MEAL post.  The chicken that came with this meal said “Best By 6/24”, so I figured we could wait until then to cook this meal.  I knew the produce wouldn’t have been as fresh as it was when we received the box, but this hasn’t really affected us with our Green Chef meals.

Y’all, the produce that came with this meal was FROZEN.  I was baffled by this.  I thought that maybe it was my fridge at first, but these bags were never stored in the crisper.  On top of everything being covered in chunks of ice, it has wilted pretty severely.  The lettuce had become translucent and unusable… except for the frozen parts in the middle.  The celery was something that no longer resembled celery.

I realize that we waited a week to make this meal, but I have never had lettuce turn to gel after a week.  And the ice?  What’s with the chunks of ice?  What’s with the frozen produce?  I wasn’t expecting to have to defrost my lettuce under the sink!  It looks like we may not be making the switch over to Hello Fresh just to save a few bucks.

Produce issues aside, here is how you make Bloody Mary Chicken!

Here is another cute little bag with all of the ingredients:

I, personally, am not a fan of Bloody Marys.  I don’t know how anyone can stand V8 Juice!  This recipe was definitely creative.  It has all of the essential makings and flavors of an actual Bloody Mary. 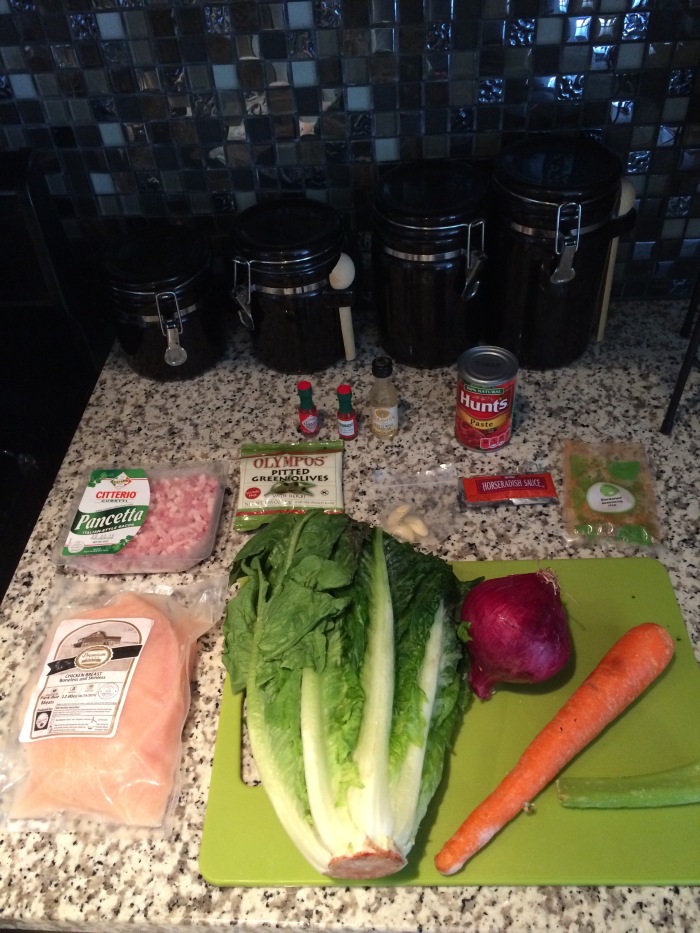 The first step was to thinly slice 1/4 of the onion.  I actually wouldn’t have minded including at least half of the onion when it was all said and done. 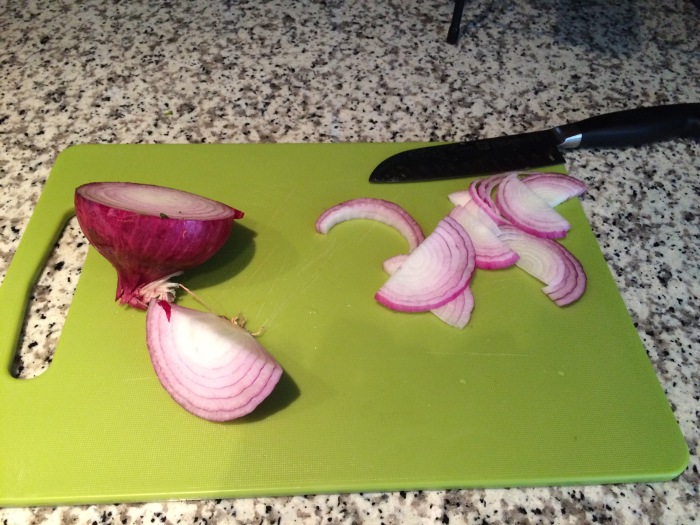 I placed the onions in a bowl and added vinegar so they would pickle.  I love the concept of using the word pickle as a verb.  I had no idea pickling was this easy!  I ended up doing some of this prep work before I went to the gym, so these onions were nice and pickley when I got back. 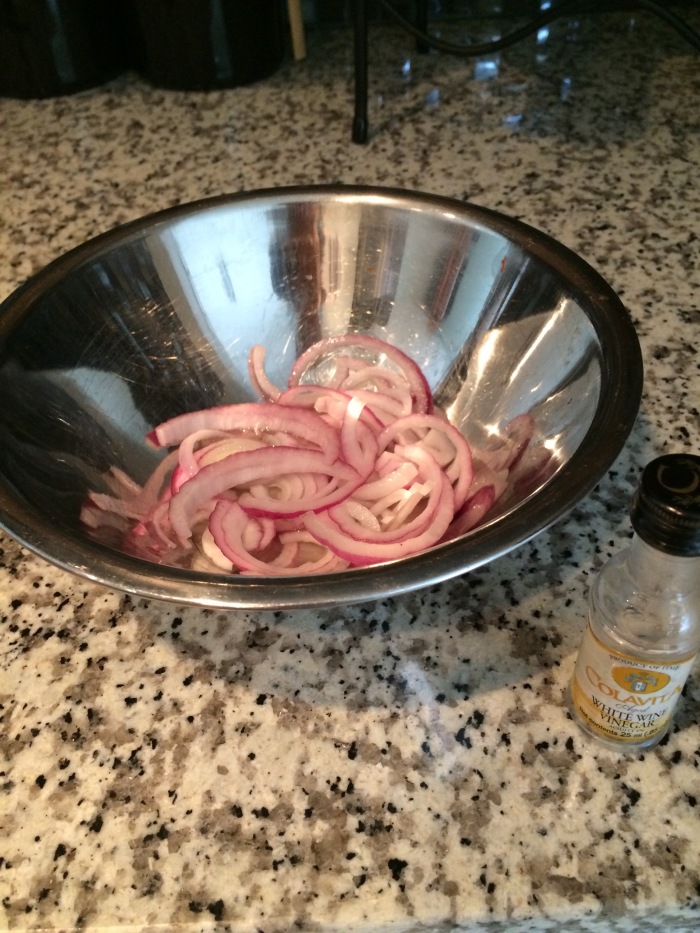 I was SUPER excited to use my new garlic press.  If you don’t have one of these, get one.  Your days of mincing and having stinky hands are over! 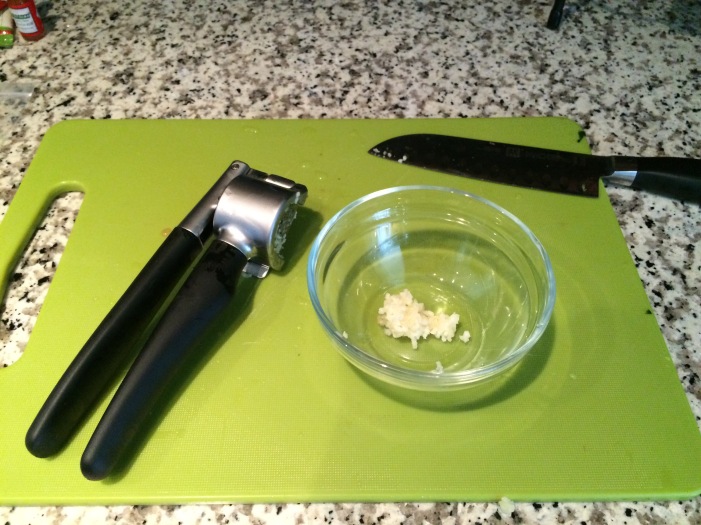 This, my friends, is the sad little piece of celery that was covered in ice and nearly fell to pieces in my hand.  Like the lettuce, it too had turned into a gel-like substance.  Needless to say, it was not included in this meal.

I shaved the carrot into shreds and placed them in cold water while I prepared the rest of the meal.

I coated the chicken breasts in the blackening seasoning and cooked them in a pan for about 4 minutes on each side.  I then placed them in the oven to finish cooking for another 6 minutes.

Using the same pan and incorporating the chicken driblets, I cooked the pancetta.

Using what was now a combination of the chicken and pancetta driblets, I mixed the tomato paste and garlic together on low heat for about a minute.  This was the beginning of the Tomato-Horseradish Vinaigrette. 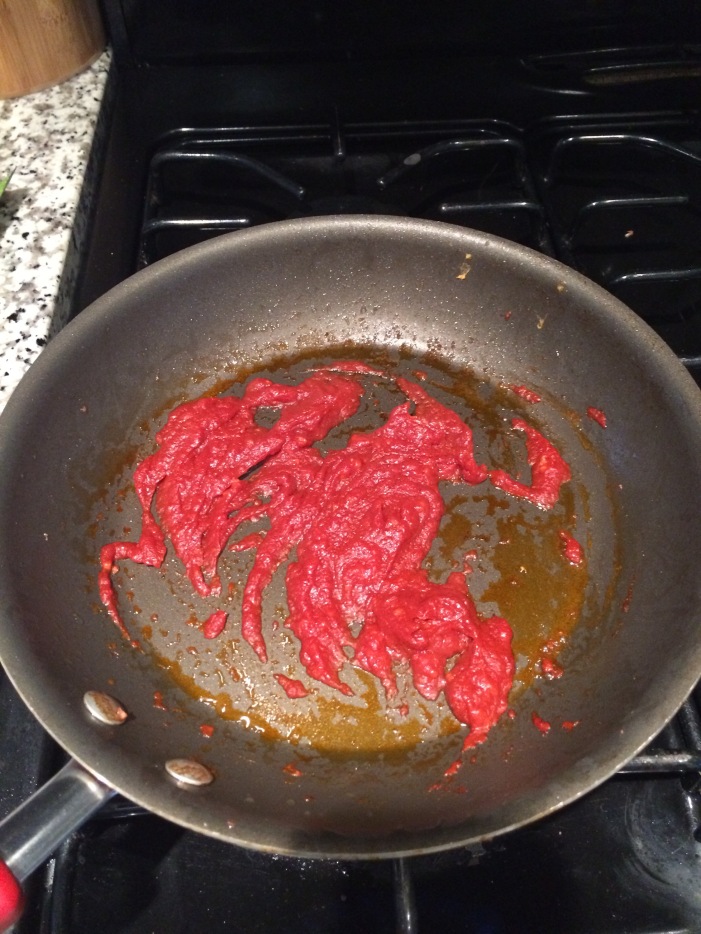 I then added the vinegar I used to pickle the onions, a packet of horseradish sauce, a teeny tiny bottle of Tobasco, olive oil, salt, and pepper.

It actually turned into a pretty rad looking sauce.  I never would have thought in a million years to add those ingredients together.

After using the super cool salad spinner my boyfriend’s parents got me for my birthday, I picked out the edible pieces of lettuce and tossed them with the carrot shreds and pickled onions. 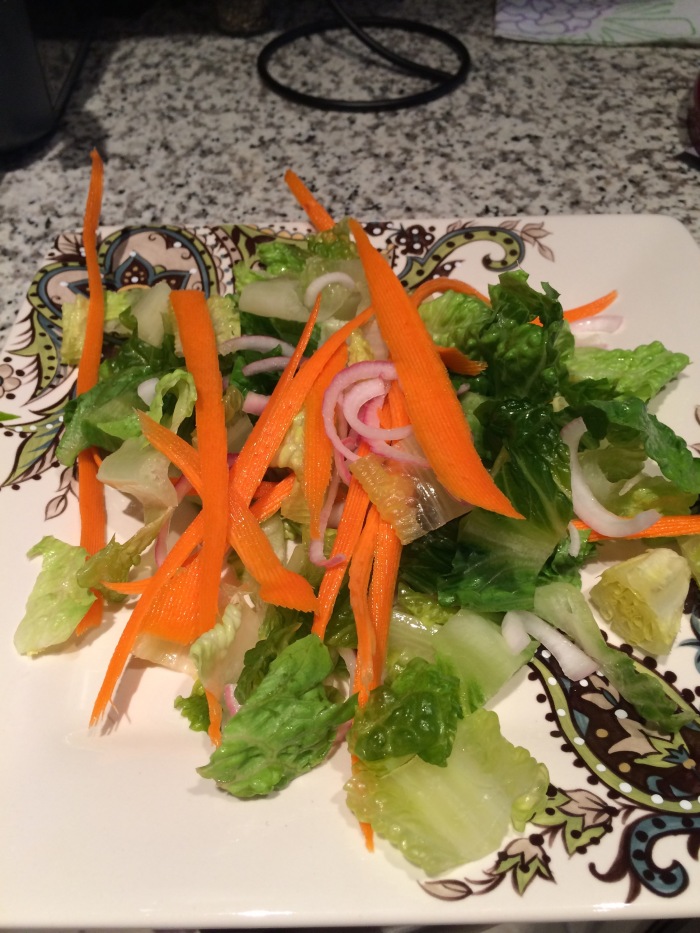 Finally, I topped it with the pancetta, olives, chicken breast, and Tomato-Horseradish Vinaigrette.

Have you been able to form your own opinion on whether or not you would like this recipe?  Ok, good.

My boyfriend thought this meal was spectacular.

Y’all, I did not like this meal.  Not one bit.  The chicken was fine.  The sauce was good after a couple of bites and then it became way too overpowering. Also, a hot, thick dressing should never be used for dressing on a salad… in my opinion.  Even though I salvaged the edible pieces of the wilted produce, it wasn’t doing this recipe any favors.

I should have known I wouldn’t like this recipe.  I am by no means a picky eater, but this recipe sure did have most of the few things on my “yuck list”.  Really, the only thing that could have made this worse for me was to include eggplant.  I don’t like Bloody Marys.  I don’t like olives (even though my dog is named Olive and yes I know it’s weird).  I love carbs too much for something like this to be served over a bed of lettuce.  The only part I liked was the onions.  And the pancetta because, let’s be honest, it’s bacon.

For me, this was a huge disappointment.  I was hoping the last meal from the box makes up for how I felt about this one, but that will be another post for another day.