Hello, all!  I have great news!  I passed the Series 24 last week!  I was so unbelievably relieved.  It was definitely the most difficult exam I have ever taken in my life.  I did not feel very confident during the exam and was surprised to see that I passed!  I am so glad to have it behind me, but I have already started studying for the next one.  I am taking the Series 66 in two weeks from today.  Oy.

The fiancé has not been feeling well for the past few days, so I decided to make him some magical matzo ball soup!  If you did not know that matzo ball soup can cure most airborne sicknesses such as “allergies”, or what my fiancé calls his mild cold, well, now ya know.

I have never made matzo ball soup by myself before.  This may come as a shock to most.  Or you may not care.  But I have just never had to make it myself.  I have been spoiled by enough Jewish mothers in my life to have never needed to learn how to make it.  I figured that I am going to be this man’s wife in a year’s time, so I should probably figure out how to make the magic potion myself.  Every time I ask my mom to make it for me, she just says, “You can make it.  It’s so easy!”  Then I respond with, “but MAWM it’s so much better when you make it!”  Because it is.  Then she usually does.  And then my soul is happy.

No matzo ball soup recipe will ever compare to my Russian grandmother’s.  Not only does she boil actual chicken bones for an eternity, but the special pinch of love she adds to her soup makes it like no other soup you have ever had.  Whenever I go to visit her, that is all I want to eat.  She always says, “My Shayne Meydele, what do you want for breakfast?”  “Chicken soup, grandma.  Just soup.  Soup for every meal.”  We call it “chicken soup” in her house because her soup has little chunks of chicken.  Because ya know, the part about using a real chicken.

It took me an hour and a half to get home today.  Not to mention it gets basically starts getting dark at 4pm these days, so there was no boiling of chicken bones in this house.  Trying to ask the goy who worked at HEB where the matzo ball soup mix was an adventure, but he very happily helped me track it down.  I bought all three remaining boxes.  It Texas, people.  You take it when you can get it.

Since I wasn’t able to make the broth myself, I tried to think of other ways I could make it like my grandma’s soup.  So I bought little teeny egg noodles and fresh dill.

I will walk you through how I made this soup.  Fair warning, it’s not rocket science.  Because the directions are on the back of the box.  And my mom is right.  It is SO easy to make.

Here are the ingredients I used:

Some of you may know Manischewitz as the really sweet grape-juicy wine that your friends snuck in the corner of your friend’s Bar Mitzvah that one time.  The name is synonymous with many-a-jew’s first experience drinking “wine”.   A little tidbit of info for you, they make other important stuff, too.  Like all things Matzo. 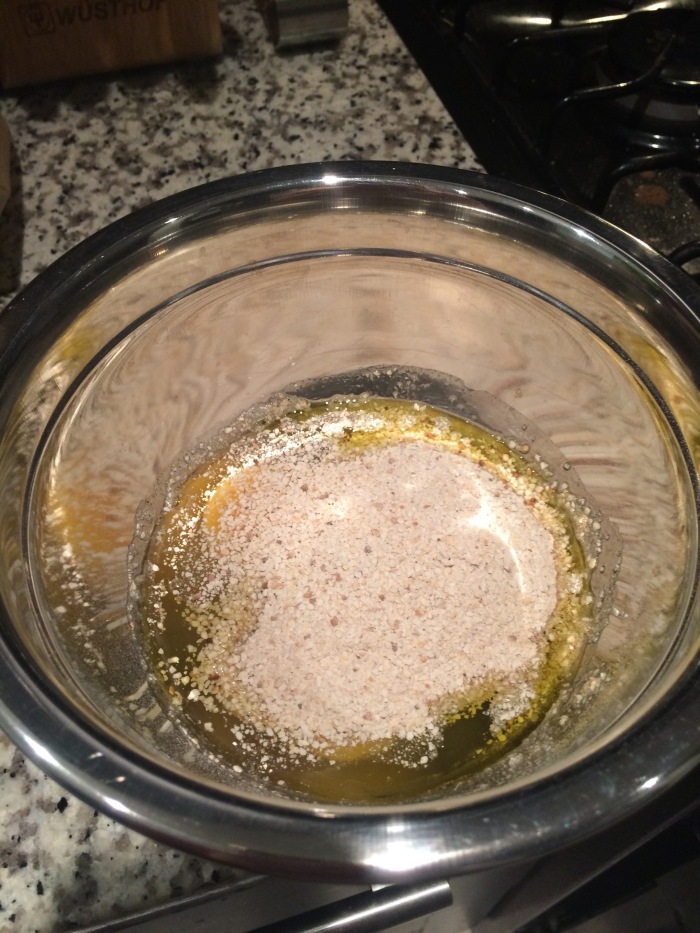 I was shocked at how small this amount seemed to me and that any Jewish woman would think this was enough to feed anyone.  Because we like to force feed people.  So I cracked open another box and doubled it and placed it in the fridge to chill for 15 minutes.

I then poured 10 cups of water into a pot to boil along with the packet of soup mix.  It as clumpy and weird at first.  Even though I doubled the matzo mix, I didn’t double the broth.  Looking back, I probably should have.  I should have remembered how much the fiancé loves broth. 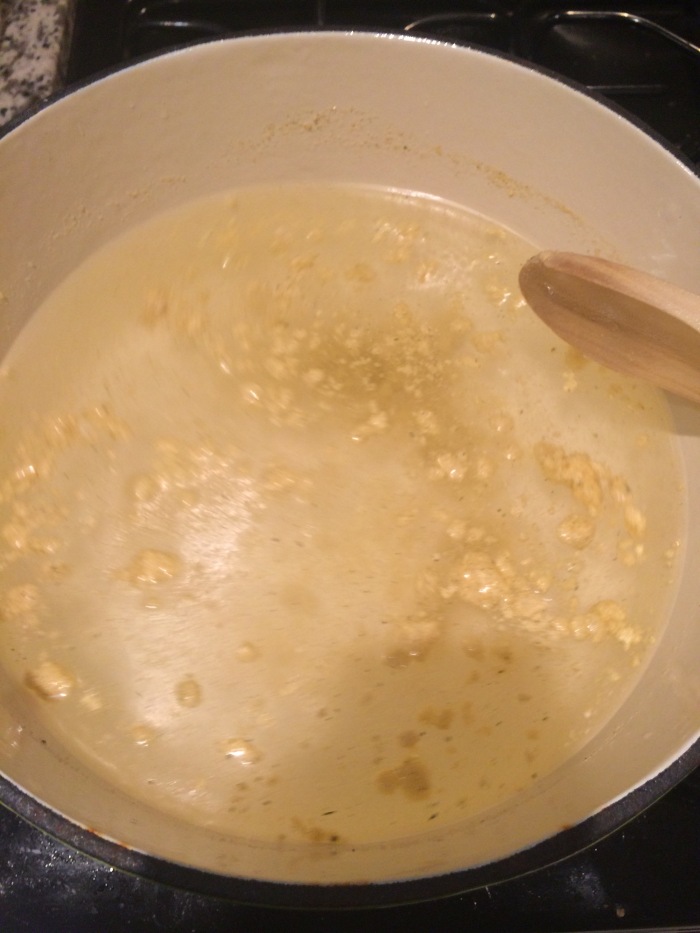 Then, in true grandma fashion, I sprinkled some fresh dill into the pot.  It made it seem fresh and made me feel much better about the fact that I was making broth from a powder mix.

The broth tasted like it needed a little somethin-somethin, so I added some chicken boullion.

I took the matzo ball mix out of the fridge and made them into little magic soul food spheres.

I carefully dropped them into the broth, placed the lid on the pot, and let them simmer for 20 minutes.

In the meantime, I boiled the teeny tiny noodles.  These noodles take four minutes to cook.  This pleases me.  I love me some instant carbs. 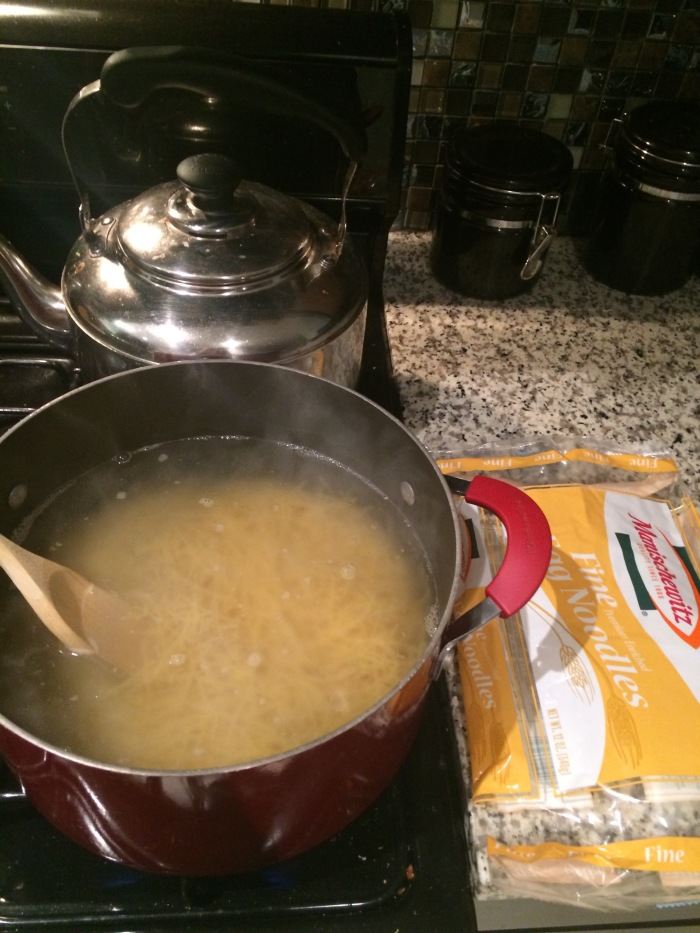 After the 20 minutes were up, I called the fiancé over for the big reveal.  Oh.  These things expand.  BIG TIME.  Now I see why one batch of this mix is probably enough.  Oh well… more for us. 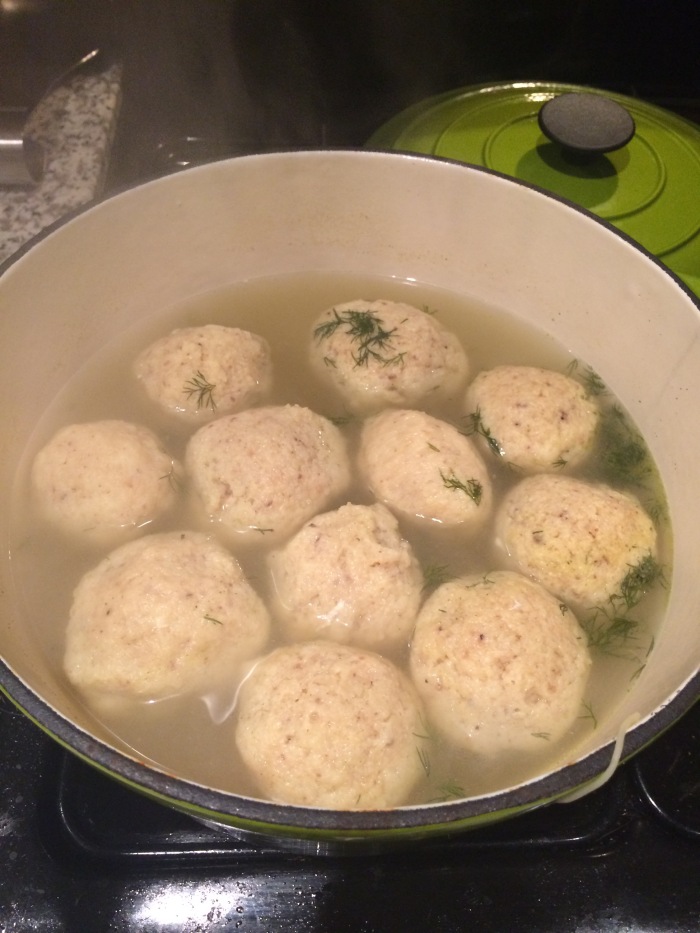 To assemble the soup, I created a bed of noodles on the bottom, plopped some matzo balls on top, covered it with broth, and placed another little spriggy sprig of dill on top.  See, not rocket science.

‘Twas a huge hit.  However, I have another batch of broth boiling at this very moment.

I feel very accomplished now that I have made this myself.  Like I have earned some sort of ultimate Jewish Mother Badge of Honor.  I now know how to make Latkes and Matzo Ball Soup.  Next up, learning how to make chopped liver.  Just kidding.  That will never happen.